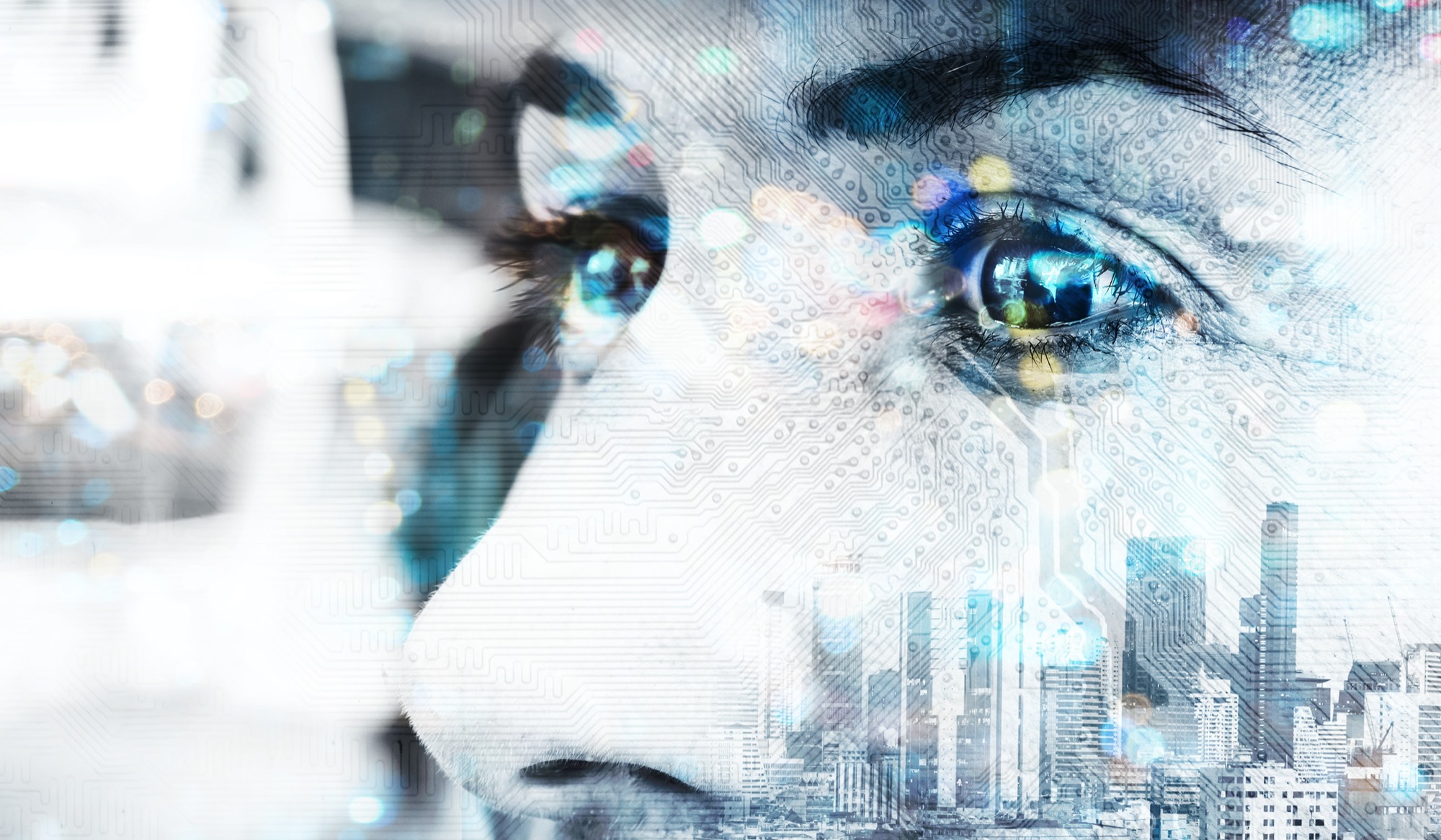 As already described in Part 1 (available at: PART 1), non-relative databases can be divided into several categories (in terms of data model):

The following article provides a brief description of each of them. For a more complete picture of individual types of non-relative databases, a sample data model, implementation and characteristic advantages and disadvantages are also added.

The data model is in the form of a large scalable HashMap. Each single element in the database is stored as an attribute name (“key”) together with its value.

With the key, the customer has the possibility to obtain a given value, insert a new value into it, or delete it completely.

A value, on the other hand, is a “blob” field, which is simply stored, without specifying a particular type of data (as in the illustration below). The understanding of the content lies with the application.

A new data warehouse with high availability, ease of use and scalability. In addition to the open source version, it is available in a supported corporate and cloud storage version. The rakia has a fail – safe data replication and automatic data distribution in the cluster to ensure performance and resilience.

Default interaction with the database via HTTP API:

As the name suggests, their main element is documents. These are self-describing, hierarchical tree structures, stored and returned by the database. Sample formats of documents:

Documentary databases are a collection of documents, which in turn constitute a key-value warehouse. The stored documents are usually comparable, but do not necessarily have to be the same.

Sample documents (equivalents of lines in the relational database): 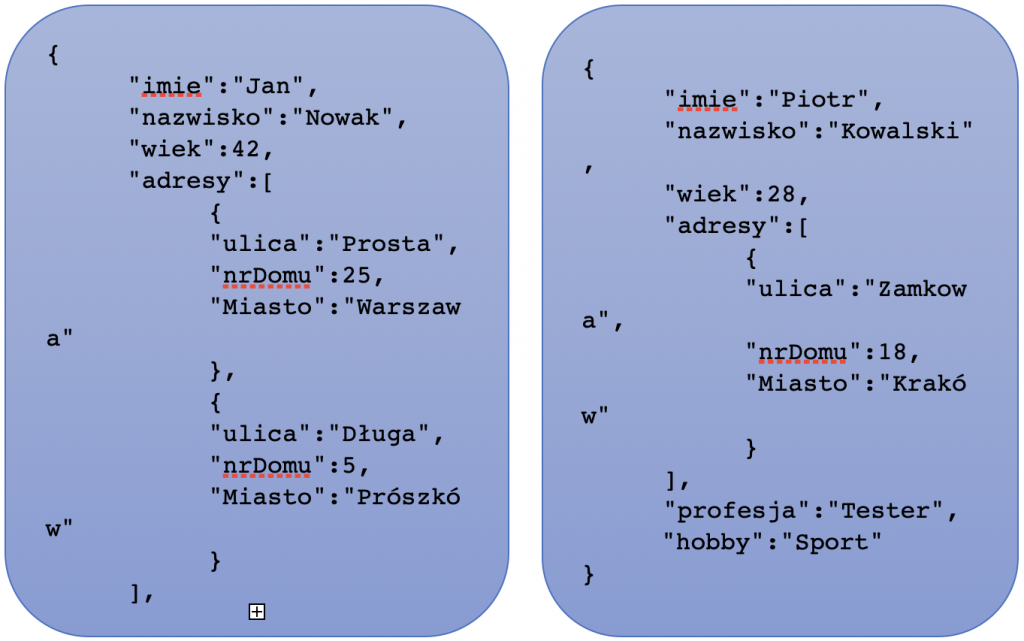 Multi-platform, non-relational database system, created in C++ language. It does not have a strictly defined structure of supported databases, instead it uses documents in BSON format (slightly similar to JSON, but in binary form). This allows applications to process them more naturally, while maintaining the ability to create hierarchies and indexing.

Graphic databases are based on storing knots and edges between them. A node is equivalent to an entity, while the edges correspond to a relationship. An example model can be presented as follows: 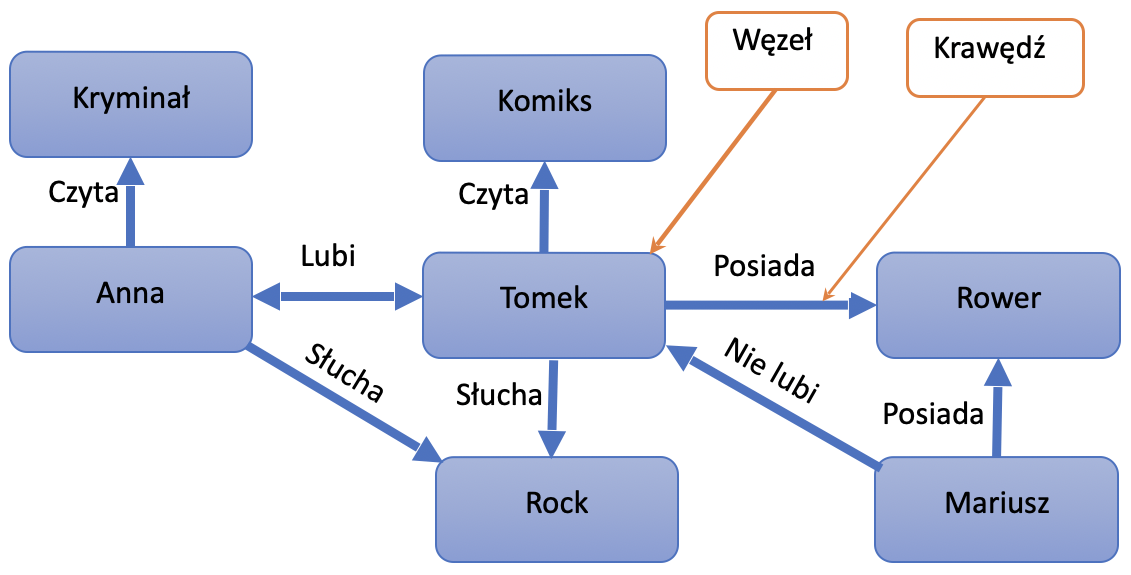 Both knots and edges have their properties. The organization of nodes according to relationships allows to find the desired patterns. 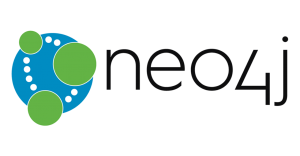 ACID-compliant transactional database with native graph storage and processing. One of the most popular solutions in the category of graphical databases.

Neo4j has been implemented in Java but is also available from applications written in other languages. This is made possible by a dedicated query language called Cypher, communicating via HTTP transactional endpoint or “bolt” binary protocol.

In the case of column family databases, as the name suggests, the data is stored in the form of a column family – a group of related data that is usually collected together. These, in turn, are stored in rows with assigned keys.

The concept of this type of database can be compared to a huge, demoralized table with many rows and columns. Therefore, they are mainly used in the VLDB (Very Large DataBase) sector. 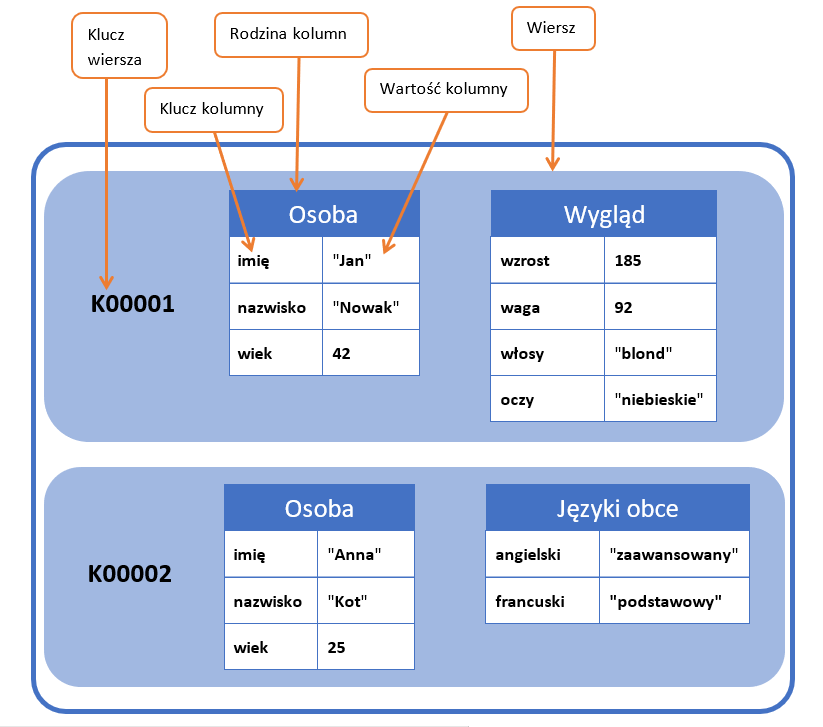 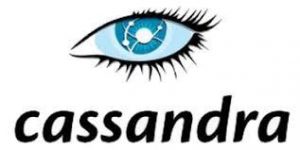 A distributed database management system designed to handle large numbers of distributed data on multiple servers. Write operations are performed on the whole cluster that does not have a main server. This enables asynchronous reading and writing of data, which translates into minimized delays.

There is no one comprehensive data model to remedy all illnesses. Each of them presents its own specific properties and is used in the area where they work best.

The choice of a specific solution should be dictated by the desired features of the database and the problems they are supposed to prevent.

The above article gives an opportunity to get acquainted with individual data models and their specific implementations, which shed some light on the subject and gives a general picture of the most popular solutions on the market today.